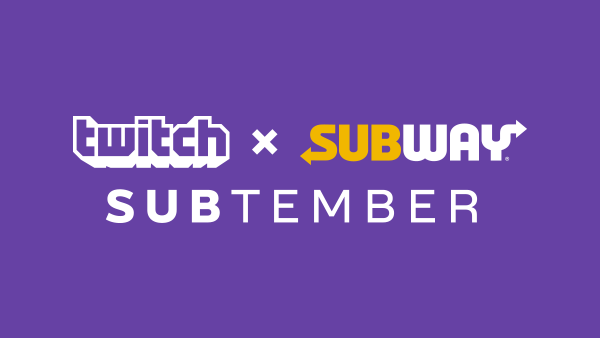 Folks It is Time for Subtember 2019 on Twitch

Once again, Twitch is doing their Subtember event in 2019 and you can be a part of it and support this very website’s Twitch channel.  But first, you might be asking yourself, “What is Subtember, and why does it help Twitch streamers?”.

Well, this year, they are doing some things differently but it actually works better for the streamer.  Basically, during Subtember, anytime you purchase a sub, it will be half off for that channel.  So instead of paying $4.99 for a Tier 1 Sub, you will only pay $2.50 for that sub.  The even better thing about this is that the Twitch streamer still receives their full payment amount.  So you get a discount, and me as a streamer does not take a hit on the amount received.

This year, Subtember is also different in that Subway is joining the cause on Twitch in September.  Basically, if you give bits (The Twitch donation currency) in a channel in an amount greater than 10, Subway will add 10% to your bit donation.  So if you throw a streamer 100 Bits, they will actually get 110 bits, courtesy of Subway.  Subway will also be gifting subs in channels (although I bet this is only going to be in the higher profile channels if you ask me), so you might get a sub courtesy of Subway.  And then Subway will be starting their own Twitch channel on Friday, September 6th, 2019.

So if you want to help out this humble streamer, go head over to https://www.twitch.tv/mclazyj and click on that subscribe button, or throw some bits during a stream.  Everyone wins, and on top of it, if the streamer gets enough subs, they get more emotes for their channel.  So yay for emotes!